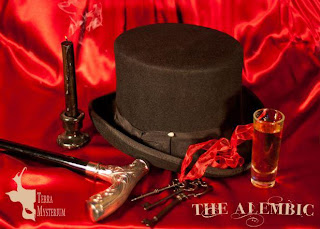 George Sorenson is a spoiled Baron who has frivolously spent the majority of his wealth, and married for money.  In the Steampunk literature and subculture, he is the charming rogue, manipulator, and playboy.  Because he is base, leaden, and earthy in his desires, he believes that most of humanity is truly “lower than low,” and is always looking for the “con,” because he himself has played the cad.  However, he does have a genuine affection for Phineas, and is very protective of him, for he believes Phineas a dreamer who only sees the good in humanity.

Sorenson possesses a key to the personal property (and often metaphorical and actual hidden places) of all those closest to him, yet has not been able to unlock the door to his own personal spiritual transformation.  When he encounters the true powers of a genuine Goddess what doors within himself will finally be unlocked, and what will be unleashed?

Sorenson is portrayed by Chicago actor Sean Wilson, in his Terra Mysterium premiere.  Below, you will find a character background written by Sean and learn more delightful tidbits about this charmer.

"The Alembic" opens tonight as an official selection of Chicago Fringe Fest.  All performances will be presented at Dream Theatre, 556 West 18th Street, Chicago, IL 60616

You can purchase your button and ticket at the Dream Theatre, or here:
Online tickets for "The Alembic"

Favorite things:
Favorite color: Red
Least favorite, why? Purple; mother wore purple to just about every ball. It reminds him of lilacs. The smell is nauseating.
Favorite music? A march. Something with strong drums.
Least favorite music, why? A waltz. Can never dance with the one I intended.
Food: A thick steak, potatoes, and red wine.
Literature: Marquis De Sade.
Expressions: My sweet.
Expletives (curse): Hasty hell.
Favorite mode of transport: Carriage
Hobbies: Gambling and, on occasion, hunting.
How do they spend a rainy day? Complaining.

General:
Favorite clothing, why: Clean cut and with one or two sharp colors. He likes to look sharp as a knife.
Least favorite, why:  The kind women wear in mourning.
Jewelry or other accessories: I have a lovely collection of cuff links, many from my father who has since passed.
Drives what type of vehicle or animal:  Ask his driver. It's new, that's for sure.
Where does he live: London, with his wife.
Where does he want to live: London, alone.
Spending habits, why:  Only the best will do, so he is sure to invest in appearance and parties to keep up social standing.
What does he do too much of, why: he has a habit of sleeping with women to prove a point. That he can.
Most prized possession, why:  His collection of keys. No door should shut him out.
People he secretly admires and why:  Phineas.  He longs for a partner like Phineas. Someone who accepts his advice and skepticism.
Person he is most influenced by, why: His mother is the one who motivates him the most deeply. Her history with George has unknowable depths. At a young age, she locked him in a closet at a young age when he misbehaved.
Most important person in his life before story starts, why:  Phineas. He is Sorenson's only friend. The only one who listens to him.
How does he spend the week just before the story starts: In a brothel, gambling. All things that make my wife nervous.
Traits:
Optimist or pessimist? Why? Pessimist.  He believes everyone is out for themselves.
Introvert or extrovert? Why? Extrovert.  He can be quite an entertaining host at times.
Drives and motives: Driven by sex and power. He longs for the respect of others. He gets that from women through sex.
Talents: Charm. Rhetoric. Tying a tie.
Extremely skilled at: Seduction
Extremely unskilled at: Math and science
Good characteristics: He is cautious and, if he respects you, he will protect you. He can be loyal.
Character flaws: He always wants more. There is never enough.
Mannerisms: Holds a glass constantly. Smiles too much.
Peculiarities: Fingers his keys in his pockets.
Biggest regret: When attending an all boys academy, he had a fling with one of his classmates. He became deeply invested, eventually telling the boy he loved him. To the other student, this was only a fling.  Sorenson was crushed and extremely embarrassed.
Minor regrets: Sleeping with his last housekeeper. Elsa had to fire her.
Biggest accomplishment: Marrying Elsa. It was for the family's survival. He can now support his mother who philanders about France with her friends.
Minor accomplishments: He has yet to lose Elsa's clothing manufacture to her brother.
Darkest secret: See biggest regret.
Does anyone know? The boy involved in the fling did tell a couple of others. They would sing "Georgie Porgie pudding and pie, kissed the boys and made them cry, when the girls came out to play, Georgie Porgie ran away." It destroyed him.
How did they find out?: These things were semi-known at the school. When the boy Sorenson fancied was accused of the relationship being serious, he saved face by saying that Sorenson accosted him.

Background:
Living situation: He is living very well, but at a debt to his wife.
Type of childhood:  Whose childhood is easy? Extremely abused and neglected by parents, though without violence.
First Memory: Nurse throwing skirt over his head, playing peekaboo. He could see her bloomers.
Most important childhood event that still affects him/her:  His father was always very ill and never in full health.  Because of this, his mother handled much of the discipline, locking him in a closet for hours to teach him a lesson. His father resented him for having good health and never amounting to much in academics.  The elder Sorenson verbally abused his son.
Why?  His father was disempowered by his wife.  Sorenson has become his father.
Education: Well educated, but not much stuck.
Religion: Atheist, though publicly Protestant.
Finances: disposable allowance from his wife.

Personality:
Are they a daredevil or cautious? Cautious
Do they act the same alone as when with someone? They do not.
Habits: Philandering playboy.
Drinks: Too much.
How much: Enough to make the girls pretty and his words loose.
Greatest Strength: Sexual conquest. Good looks
Greatest Weakness: Academic confidence.
Soft spot: His parents.
Is their soft spot obvious, why/why not: Not, he's a W.A.S.P.  Avoids direct emotion.
If not, how do they hide it:  Avoid the topic, or diffuse the situation with a joke at his parent's expense.
Biggest Vulnerability: Believes he is a bad guy.
Zodiac Sign: Gemini
Myers-Briggs type: Type B.
Enneagram number: 4

Relationships:
Mother: Catherine Sorenson
Relationship with her: Blames her of him and for wronging his father. He rationalizes that it was in her nature as woman.
Father: Jonathan Sorenson
Relationship with him: Pities and resents him for being weak with his wife. Sought his approval.
Siblings: None.
Children of siblings: Single child.
Other: Extended family; no one left besides a decrepit senile aunt. He only knew her as a child, but she lives comfortably.
Close? Why or why not: Not close. Parents too self-involved for him to visit any extended family. It carried over into his own life.
Spouse or Partner: Elsa Sorenson
Relationship with her: Married for money. She lets him get away with a lot. But when she has to, she knows right where to hit him.
Friends and Colleagues: Phineas
Relationship with him: Fascinated, because he doesn't understand his goodness. Loves him because he has placed him on a pedestal.
Generally speaking, how do they relate to other people:  Sociopathically and opportunisticly.
Are they the Hero/Heroin of the story in their own mind: No.  He believes everyone is fundamentally depraved like him. (Phineas eludes his understanding.)
If not, how do they view the Hero/Heroine: There are no heroes.
Self-perception:
One word they would use to describe themselves: Realist.
One paragraph of how they would describe themselves: I recognize the truth in society and therefore can use it to my advantage. I know how to play the game and I know that selflessness is irrational and doesn't save you. I may not have the academic knowledge, but I'm smarter than most because I don't delude myself by thinking there is inherent goodness in people.
What do they consider their best physical characteristic and why: My chin. It's masculine and strong.
The worst one? Why? My neck. It looks too fragile.
Are they realistic assessments? Somewhat.
If not, why not? He views fragility in himself as unattractive, although it's not.
How they think others perceive them: Hopefully, a charmer. He worries that they see him as a fool.
What four things would they most like to change about themselves: He would like to have stronger hands, complete confidence that he is always right, a dead wife, and a sharper wit.
Why? The obvious reasons.
If they were changed would they be the same person, why/why not: Yes. He would lack remorse, but he would actually be less vicious to women (without his wife to enflame his misogynistic hatred).
Most at ease when: Drinking with Phineas.
Most ill at ease when: Alone.
Priorities: Perpetuate his reputation.
Philosophies: Everyone is out for themselves.
Past failure they would be embarrassed to admit: He loved someone once.
Why? Love inspires selflessness, which he believes is destructive.
If granted one wish what would it be, why? Elsa would die, so that he could be traveling and playing with Phineas (once he convinced him to leave his home.)

Goals:
Immediate: Discredit Vera.
Long term: Get freedom from women. Be more like Phineas and make Phineas more like him.
How do they plan to accomplish these goals: Seduce Vera, blackmail her. Keep Phineas on his side.
Problems/Crisis:
How do they react in a crisis: Self preserving.
How do they face problems: Either hiding, delegating the work to someone else, or sabotaging others.
Kind of problems they usually run into: Ones usually involving a woman.
How they react to new problems: Unsurprised.
How they react to change: Combatant.
Posted by Matthew Ellenwood at 12:41 AM