The Importance of Pagan Pride 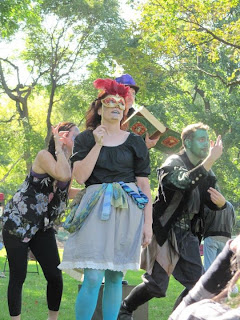 On September 17th, over 500 people attended the Greater Chicago Pagan Pride day gathering at Pleasant Home in Oak Park, IL. According to the facebook group, over 1118 pounds of food were donated during the day and gratefully collected by the Greater Food Depository. A shout-out to Terra Mysterium’s Amy Christensen for making the arrangements with the Greater Food Depository. If you weren’t able to attend the event, please make a donation here "donate."
Gregory Brewer and his team should be praised for their work in creating a memorable day, and offering our community a chance to connect, learn, listen, and find joy together. 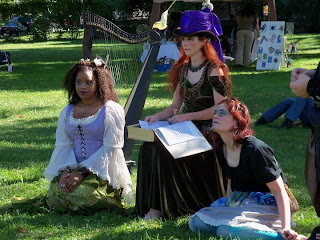 The language used above perfectly demonstrates the activist/earthy roots of contemporary Paganism. 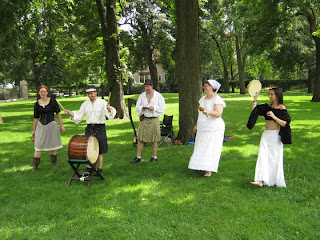 So why is Pagan Pride important? All too often people and organizations get bogged down by their day-to-day operations and individual concerns. Add to that the following:
· that Pagan and Earth/Nature based religious traditions are all too often misrepresented in the media,
· that we must chose to either to “come out” everyday of our lives, or to hide in fear of constant discovery and suffer the potential loss of jobs, housing, etc,
· that the community endlessly debates with itself the minutia of the various philosophies, theologies, cosmologies, and all other "–gies" that make up these faiths. We even debate what to call the community itself
· that groups and individuals are harassed for their beliefs by uninformed hate-speak. Take a look at the New Apostolic Reformation’s ideas about Native Americans
The end result is that it can all feel very isolating, especially if you are a Pagan living in a small town ("The Small Town Pagan's Survival Guide: How to Thrive in Any Community by Bronwyn Forbes). Connecting in a community that honors diversity, pluralism, and the presence of the sacred in nature is a very powerful remedy.
Pagan Pride allows everyone to connect with not only those of a like mind, but with the greater community. Many people who attend may have never experienced a public ritual, or had exposure to these faith traditions. There is a great deal of education available for newcomers and the curious. On the whole, Pagans are a gregarious, and enthusiastic bunch who love to share thoughts with those who take a genuine interest. Let us make sure that the face we present to the greater community is welcoming, well informed, and “comfortable in our own skin.” 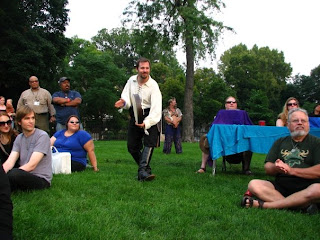 However, we have a lot of work to do. Let us be even better informed, better organized, and speak out for our liberties. This is why Pagan Pride is so important. We must not hide from the world, and we must help each other. Let us also ally ourselves with other minority faiths to work together for our right to practice our religions in peace, freely, as the founding fathers intended. Let us embrace pluralism and the acceptance of different religions, worldviews, and philosophies. We must also fight against any groups who seek to limit pluralism and the freedom to practice religion.
Take, for instance, this group. Click on “51 Days of Reformation Intercession” to see the prayer schedule and intent. Beginning on October 3rd and ending November 22nd, a group of neo-Pentacostal Christians will be exorcising the United States of America of “Pagan influence” one state at a time in the reverse order of the adoption of Statehood. They will culminate in Washington District of Columbia on 11/11/11 to overthrow the “Goddess”of Columbia (Liberty), and institute the title: Washington District of Christ. Their goal is to establish Christian law as supreme in a land that is pluralistic by law, and the intent of the founding fathers. For more on Dominionism, click here.
It can be very easy to dismiss these folks as extremist crackpots, but I point you to the powerful book “Contemporary Paganism: Minority Religions in a Majoritarian America” by Carol Barner-Barry which effectively demonstrates what minority religions suffer legally due to the prejudices, and arrogance of majoritarian American religious beliefs. The text shows how badly our rights to freely practice our religions are being eroded away without our awareness. Have your non Pagan friends read it too, so that they can also engage the world around them in a more just manner.
In response to the above, I firmly believe that we need to stop publicly debating differences in theology and embrace pluralism. We need to spend less time explaining our core beliefs, and more time demonstrating that we are concerned citizens and taxpaying workers who are invested in our communities and the work at hand.
As an antidote to the uninformed “sound-bites” of tea-party rhetoric, I recommend that everyone read Barbara A. McGraw’s excellent text “Rediscovering America’s Sacred Ground: Public Religion and Pursuit of the Good in a Pluralistic America.” This book is an enlightened balm for the soul filled with sound history, and the philosophy of the founding fathers, and the time in which they lived and created our country’s governing documents. 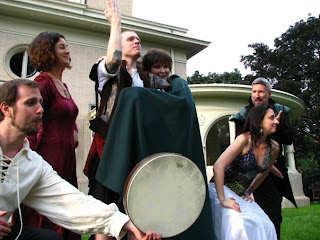 Last, we need to continue to create and support art, music, theatre, film, literature, dance, and culture that will embody the ideals we wish to inform the world. We are the land, and we are the World. We do not have dominion over any living being because everything in nature is our kin. Let us work everyday to be better stewards of the Earth, children of Gaia, and the embodiment of the Divine.
Posted by Unknown at 2:30 AM 1 comment:

Terra Mysterium presents a series of behind-the-scenes videos exploring who we are and our creative process.

This week Professor Marius Mandragore pauses from his interdimensional travels to rub elbows with the genteel folk of Steampunk Chicago.

Have any questions you'd like answered in a future video? Leave them in comments. We hope you enjoy the video!
Posted by Unknown at 10:28 PM No comments:

What Terra Mysterium Means To Me

My Journey with Terra Mysterium started in August of last year, as Stage Manager for their production Finding Eleusis, that was part of the first ever Chicago Fringe Festival. During the rehearsal process I was introduced to Viewpoints, which was something I had never heard of prior to working with them. Being new to the whole Viewpoints process I felt kind of strange at first since I was not on the stage interacting with the actors but above them in the booth. However, once I started performing with the group, as part of the ensemble, the exercises made a lot more sense me. Viewpoints truly feels like such a smooth organic road to character development.
This summer I had the privilege to perform with the group at Earth Traditions Oasis, where we performed our three shows Finding Eleusis, Professor Marius Mandragore’s Salon Symposium: Regarding Spirits, Spells and Eldritch Craft, and Betwixt and Between. It was very interesting rehearsing with Viewpoints when rotating between three shows, because in the beginning I wasn’t sure which character a movement was for. Of course the further we got into rehearsals the distinctions became very clear, as my characters in each show would hold and carry themselves so completely different. Delores Dion from Mandragore was the proud student, rigid, by the book, strong and doting on her Professor. An ensemble member of Finding Eleusis making shape with the others, and as Baubo, a boisterous, bawdy, life-of-the-party Goddess of Mirth. And of course as one of the Fae in Betwixt and Between. While it was taxing to have three shows to do during this retreat I have never felt so alive.
One of the many things I love about being in Terra Mysterium is that I have learned so much about ritual theatre, magick, and living sustainably, from our Director Matthew Ellenwood, and Assistant Director Keith Green. Also, that it is an environment in which creativity flows and is encouraged. When revamping Betwixt and Between we were asked to pick a flower and then write a story, about something that flower might have witnessed, that had nothing to do with the main story. I sort of panicked: me write a story to be put in the show and performed for an audience! No way! All of my essays in college left something to be desired, you want people to pay to see something I wrote!
Calling in a stiff upper lip, I grabbed a pen and a notebook a started to write a story about a sunflower witnessing a family preparing for a neighborhood dinner party. Still uncertain of what I had created, I presented it to the group and to my surprise they liked it. I love that our work is truly a collaboration between all the members. The shows we perform have a little piece of all of us in them.
Now that I have been with Terra Mysterium for a little over a year, I have created, learned, traveled, and performed with the original members, and I really do feel lucky to have found and been accepted by them. This is a warm, caring, encouraging, spiritually and creatively uplifting group of wonderfully talented people, and I am glad to be a part of them. I can honestly say I have come home, I found my family.
Posted by Unknown at 7:07 PM No comments:

Terra Mysterium presents a series of behind-the-scenes videos exploring who we are and our creative process.

This week: a behind-the-scenes look at our rehearsal and collaborative creative process, creating music.


Have any questions you'd like answered in a future video? Leave them in comments. We hope you enjoy the video!
Posted by Unknown at 10:14 AM No comments: