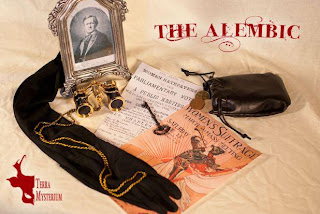 Elsa Sorenson is a woman ahead of her time.  She is the daughter of a wealthy merchant, and has married an aristocrat.  She possesses a sharp wit, a cultured elegance, and is the embodiment of upward mobility.  Elsa is a woman on the verge of independence, and a champion of equal rights for women, which is a core value within the Steampunk genre and subculture.

Throughout the majority of the play, Mrs.  Sorenson vies for the attention of her friend Phineas, and the rights to her own property.  In the end, will Mrs. Sorenson obtain her independence, and claim her place as a woman of power and influence?

Mrs.  Sorenson is portrayed by Terra Mysterium company member, and head of marketing, Kat O’Connor.  Below is Kat’s creation of Elsa’s background information, providing the readers with several juicy tidbits of information about this intriguing woman.

"The Alembic" opens this Friday as an official selection of Chicago Fringe Fest.  All performances will be presented at Dream Theatre, 556 West 18th Street, Chicago, IL 60616

Elsa Sorenson just turned thirty years old.  Her father is a businessman and merchant, who built a very successful textile importing business.  About 15 years ago, he expanded his business into a line of high-end clothing and hat-making shops for men and women.  This was a calculated move, not only to create a new revenue stream, but to also put him and his family in direct contact with the movers and shakers of London Society.

Elsa, from a fairly young age, assisted with the business, and her father recognized her sharp business acumen.  Her younger brother (a bit of a rake, though he means well) does not have the same level of business or financial savvy.  Her mother was keenly perceptive and was able to teach her daughter the subtleties and “rules” of the game of being a woman in a man’s world.  Elsa helped her father with the clothing shops and eventually was largely running them herself.  By the age of seventeen she and her father had openly discussed their plan of finding someone “appropriate” for her to marry, so as to gain social and political advantage for their family and business.  Sorenson was selected by mutual agreement, as someone with the proper titles, social standing, and power, but his family’s utter inability to properly manage money gave them a means of controlling him.

Upon their marriage, Sorenson was allowed legal ownership of one of the shops, with the not-so-subtle threat that should he run the shop into the ground, Elsa’s father would ultimately turn his business holdings over to his son, and not Sorenson.  For the most part, Sorenson leaves Elsa to deal with the day-to-day business of managing the shop.  In the short-to-medium-term, the marriage granted Elsa and her family access to Society, title, landholdings, and power.  In the long term, both Elsa and her father are aware that they are stuck with two very poor options: when her father retires, his business would either transfer to her brother, who has no head for business, or to Sorenson, whom they consider actively irresponsible.
The third option is unspoken.  However, Elsa is so resentful of the patriarchy, and the necessity of playing the game to get ahead as a woman, that she has not been able to bring herself to conceive an heir, who would be much easier to control than either her brother or her husband.  She is aware that she’s shooting herself in the foot, but she is also angry that she does not have the option to own the businesses that she has run for the better part of her life.

She is aware of Sorenson’s numerous infidelities.  She feels no sexual jealousy (indeed, she has no respect for him, and certainly no desire), but feels possessive for other reasons.  She considers Sorenson something that she has bought and paid for, and his inability to be discriminating in his extra-marital affairs – this isn’t the first low-class maid he’s chased after – devalues his social standing, and by extension devalues Elsa’s social standing.  She considers affairs as another tool to use in the social game, and is herself ruthless in its application.  She may have the potential to be bisexual, but because of her resentment and contempt toward the patriarchy, she does not enjoy the company of men in any sense (Phineas being the one exception), though she has the good sense to not let them know that.  Her affairs with men are calculated for her own social and political gain, and she excels at manipulating them.  She immediately ends the affair once she has what she wants, and is skilled enough to, if needed, make the man think it was his idea to break it off.  Her affairs with women, on the other hand… while still calculated in a certain sense (she would never consider involvement with a woman of the lower-class), she allows herself to feel genuine affection for them.

She does not fully understand why Phineas mostly eschews the game of London Society – why give up privilege that, for a man, is free for the taking? – but she admires him for it.  Since he is too involved in his lab to be a player, he is also neither a competitor nor an obstacle to Elsa.  As a friend, he allows her the small luxury of forgetting, for short moments, the relentless necessity of playing the game to get ahead.  Being seen at the opera may be a part of the game, but with Phineas she can actually enjoy watching it, too.

Despite her political savvy she approached her marriage rather naively.  (Granted, she was 18.)  Politically and socially it was a good move, so she was right on that count, but she more or less expected to settle into contented, if lukewarm, couplehood once the wedding was over, and they would be working with each other toward good social standing and he, being bad with money, would let her handle the finances without interference.  She was unprepared for the fact that Sorenson would have different ideas about their marriage.  Her hurt comes less from having been in love with him – at least in the sense we commonly think of – but more from the fact that Sorenson was chasing after every skirt except for the one he was supposed to have.  She was accessible but he still didn’t want her.  He made her feel unattractive.
Posted by Matthew Ellenwood at 9:54 AM