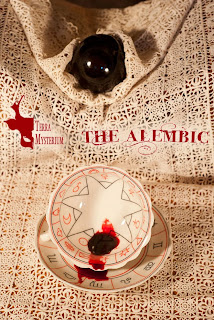 Astraea (Starry One), daughter of Themis and Zeus, is a Goddess in possession of all noble virtues and, therefore, a perfect ideal to strive towards for humanity.  She is Columbia, Liberty, and all the ideas of justice, expansion, nurturance, and is a guiding light for humanity.  She once walked among mortals but left the world as man’s nature became increasingly more debase and animalistic. Within the context of Steampunk, she is the Victorian ideal, the deist construct, the ethical, and transpersonal cause towards which we, and all humanity, should strive.

Astraea is constantly present on stage watching, but never touching humanity.  She is divine inspiration, but not intervention.  She watches her sister Goddess’ journey, knowing all and seeing all, but hoping for the best.  She knows that each of us must walk the path of transformation ourselves, but she is always present with a kind and hopeful eye for those who have gold in their hearts.
Astraea is portrayed by Terra Mysterium company member Song Marshall.  Below, you will find a character background written by Song as she reflected upon the Greek mythos surrounding this lovely Goddess and her own transformation.

"The Alembic" opens tomorrow as an official selection of Chicago Fringe Fest.  All performances will be presented at Dream Theatre, 556 West 18th Street, Chicago, IL 60616

When the gods left Earth Astraea stayed behind to take care of the people.  The people looked up to her with her youth, beauty, and wisdom. In the Golden Age, she was happiest and truly loved humankind. With the Silver Age she became Justice and took care of the petty squabbles we mortals had and tried to keep the peace. Then the Bronze Age came, men began to eat meat. They started wars and killed each other for greed, lust, power (or for no reason at all) and her heart broke. She was then Nemesis trying the only way she had left to keep the peace, without realizing it was only helping humankind destroy itself.

She was then taken by Zeus, her father, to live in the constellation Virgo where she could still watch mortals, but where she would never again dwell among them. Now that we are in the Age of Lead, staying removed is a point of contention between Astraea and Dike.

Astraea loves the human race’s potential but is still heartbroken over what we have become. Dike thinks the gods should help the mortals and look after their sorrowing and heal their wounds. Astraea having tried this already knows that it is of no use.  They are Goddesses. They are not of the mortal world, and as such they should not try to live in a mortal world. Hoping to prove her point and quell her sister’s restlessness, Astraea has Dike descend to earth on her own. Only by experiencing it can she know why Astraea does not try to directly intervene.

This whole mission of Vera’s is a lesson, it is the most direct way that Astraea can show her what she went through whilst she was on earth, and why she won’t go back again. Vera, of course, does not understand this until she herself becomes Nemesis. At which point Astraea has accomplished her goal. Though she may seem cold and calculating, she is still jovial at times.  She is the Maiden of the Stars, she is youthful, but she is strong, and can be just as fierce as any other Goddess can be.

Traits:
Optimist or pessimist? Both: Pessimist, because of what happened when she tried to intervene, and Optimist because she is ever hopeful that she will be able to return someday.
Introvert or extrovert? Why? Introvert, she can no longer walk on the earth as she once did.
Drives and motives: Cares for humanity, but cannot intervene; she hates what humans have become.
Talents: truth, justice, poetry, art.
Extremely skilled at: Watching.
Extremely unskilled at: Justice without harshness.
Good characteristics: She is caring and loving.
Character flaws: She cares too much for humanity.
Mannerisms: She tries to keep her distance.
Peculiarities: Loving the people as much she does as an Olympian.
Biggest regret: The degradation of mankind.
Minor regrets: Becoming Nemesis.
Biggest accomplishment: Being able to keep some things from her time among mortals.
Minor accomplishments: Being able to sneak out without Zeus knowing.
Darkest secret: She wants to go back to Earth.
Does anyone know? She doesn’t think anyone does, and that she is able to sneak down every once in a while, but doesn’t stay for very long. But Zeus does know. However, ever the indulgent father, he allows it to keep her happy as long as she doesn’t stay very long.
How did he find out? He is her father; he knows her very well.

Self-perception:
One word she would use to describe herself: Lonely
One paragraph of how she would describe herself: I appear as a young Goddess, however, that is not to say that I am not just as powerful as any of the others. The people of the Earth loved me.  They still do in fact even if I can no longer walk among them as I once did. I do so miss the smell of fresh flowers, the wind on my face, the smell of the ocean; running and playing with the children and their pets; helping scholars and poets alike, and hearing the tales they spin. Now I merely watch, observe, and hope that a time of peace will return to the land, and maybe, just maybe, I can return with it.
What does she consider her best physical characteristic and why:  My swift feet allow me to run between the worlds at such a pace that my father won’t be able to catch me.
The worst one? Why? My overly large heart, it gets me into a lot of trouble…
How they think others perceive her: Possibly a little damaged.
What four things would they most like to change about herself: 1) I would like to be able to change when I come and go; 2) I would like to live without regret; 3) I want to connect with people; 4) I want another chance
If these traits were changed would she be the same being, why/why not: I would not be the same because I would be happier.
Would changing of number 1 make them more happy? Why/why not: It would. I would be happiest if I could have all of it. But the freedom to roam as I pleased would definitely be a good start.
Most at ease when: I lived in the Golden Age.
Most ill at ease when: Fighting with Dike about whether or not we could turn things around for humankind.
Priorities: instilling peace once again
Philosophies: Humans are genuinely good, they just have to be coaxed into not giving in to their darker side.
Past failure she would be embarrassed to admit:  Not applicable.
Why? My failure is no secret, everyone knows what I did and it breaks my heart.
If granted one wish what would it be, why? My greatest wish is that I could go back to Earth and be with the people that I hold so dear.

Goals:
Immediate: Teach Dike a lesson.
Long term: Bring back the Age of peace and creativity.
How do they plan to accomplish them: She doesn’t know; not sure it can be done.
How will others be effected by this: Life on earth would be better.
Posted by Matthew Ellenwood at 9:46 AM