Following the He'e'e shoot, we had to travel a bit. Everyone had been sensing the presence of Hel since we began that morning. Shannah in particular was aware of her expressing a strong preference not to be misrepresented. In traditional lore, the Norse goddess Hel is goddess of the underworld, and depicted as half corpse, half living flesh. Death and the underworld aren't these terrible, frightening things; "make me pretty" was the request, and that is what we strove to do.

We drove to a nearby cemetery and wandered around looking for someplace to shoot. All of us stopped at this arcade of mausoleums. It felt right, and it took little discussion to determine we all felt the same way. A flock of crows wheeled overhead. It was sunny but cold that day, so we brought Shannah's coat so she could warm up as needed. It turned out we needn't have bothered; in that space between the mausoleums, headstones, and a stark, barely-budding tree, it was warm and the wind was calm. 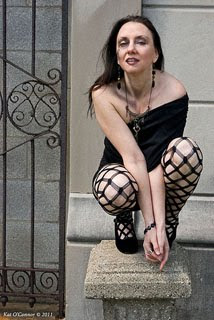 Shannah had been anxious about the shoot all morning. She wanted everything to be perfect. We picked a spot next to a crypt with an old iron gate and began slowly. Gradually a calm settled in, and it seemed that Shannah stepped aside as Hel took over.

I look back at these photos and see a vibrancy in her eyes -- a knowing of strange and mysterious things. The woman in front of me becomes ethereal, dark, sensual. She knows who she is and reveals it in glimpses. This is her place, the dead are her people, whom she loves.

She is a wild thing, untamed, and fierce in her beauty. Death comes for all but she is a gentle, nurturing soul.

We remained in our otherworldly bubble for a time. I don't know how long; it felt suspended and timeless. Other than moving from spot to spot no one said much, because no one needed to. I think we were all listening -- or, more accurately, we were all hearing. We were alone in this still place... at least in the sense of the living. We were all reverent. We thanked the dead for their hospitality as we left.
Posted by Unknown at 6:18 PM