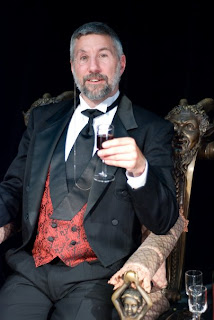 My introduction to Steampunk came about with the writing/production/ performance of our show Professor Marius Mandragore’s Salon-Symposium Regarding Spirits, Spells, and Eldritch Craft, which we produced in autumn, 2009. As we were writing it, I remember asking my partner/artistic director Matthew if he thought the sort of odd piece of Victoriana that was emerging would have any sort of appeal to people. He answered: “Oh yes! It’s very Steampunk.” That was the first time I had ever heard the word. Yes, I know, I’m very sheltered.

My first researches into this cultural phenomenon seemed to indicate that Steampunk was where people went when they felt they were too old to go in for Goth anymore – Victorian society, corsets, steam engines, etc. That didn’t seem too bad. After all, being a history professor in my early 40s, having grown up listening to Gilbert and Sullivan, and having a penchant for wearing monocles since the mid 1980s (I actually wore one along with a neck scarf to my high school graduation)[1], it was probably inevitable that I end up somewhere like this anyway. Never being one to let first impressions decide me on anything, however, I decided to dig a little deeper, and found that Steampunk was more than aging Geeks (like me) in frockcoats and tinted sunglasses. It was… is a speculative subculture filled with revolutionary possibility.

According to the (highly recommended!) Steampunk Bible, edited by Jeff Vandermeer and S. J. Chambers, “STEAMPUNK = Mad Scientist Inventor [invention (steam x airship or metal man / baroque stylings) x (pseudo) Victorian setting + progressive or reactionary politics x adventure plot.”[2] Sounds good – plenty of room for unique characters, settings, and social commentary. Sounds like the scene could get pretty radical. How radical, I wondered? I took a look at the first article in Steampunk Magazine, issue 1, entitled “What Then, is Steampunk?” and found the following: “Steampunk is a re-envisioning of the past with the hypertechnological perceptions of the present. Unfortunately, most so-called “steampunk” is simply dressed-up, recreationary nostalgia: the stifling tea-rooms of Victorian imperialists and faded maps of colonial hubris”[3] (My monocle felt a little guilty, but I read on through the end of the article.) “We do not have the luxury of niceties or the possession of politeness; we are rebuilding yesterday to ensure our tomorrow.”[4] Aha!

Here were some of the do-it-yourself, green sensibilities that I, as an earth-based spiritualist, held near and dear. Steampunk Magazine, by the way, is a virtual goldmine for this kind of information. Check out A Steampunk’s Guide to the Apocalypse and you will learn all sorts of interesting skills, including, but not limited to, scavenging, water distillation and filtration, and solar heating. You can access it here. And donate some money while you’re at it – these are good people doing worthwhile work! So Steampunk is not just old Goths in Victorian garb, it is not just airships, it is not just cool wheels and gears, it is a full blown counter-cultural movement with revolutionary overtones (we must never forget the ‘punk’ in Steampunk).

Is there room in Steampunk for magick and the occult? That’s an important question to me – my spiritual and artistic interests are both well-grounded in an understanding of the “occult sciences.” Where does Professor Mandragore and his salon-symposium fit in? Well, to some extent the good professor never quite fits in anywhere. His salon, “itself a mystery of the profound collusion of space and time,” is largely unhinged in time, moving back and forth across the “cosmic strands of magico-potentiality.” [His words not mine.] For all of that, he is definitely possessed of a Steampunk aesthetic, in manners, speech, and dress, and an enlightened worldview that I think would appeal to a good many on the punk spectrum, despite his monocle. It’s not as if magick is absent from the genre, after all. Tim Powers’ The Anubis Gates features a Restoration-era brotherhood devoted to protecting England from harmful sorceries. Ekaterina Sedia’s lovely novel The Alchemy of Stone has not only a female automaton as protagonist, but stone gargoyles, autochthonous nature spirits who helped mortals to create their civilization and who have over the eons become estranged from humanity. If you have not read either of these books, I recommend you run out right now and do so.

Yes, there is room in Steampunk for Professor Mandragore, myself, and many other people with even more radical philosophies and exciting stories to tell. I look forward to watching the movement evolve and to participating directly in that evolution. Right now, however, it is time for a cup of tea and a pipe of tobacco after dinner. Cheers.


[1] I couldn’t find any spats to complete the outfit. More’s the pity; accessories are what make the ensemble.
[2] Jeff Vandermeer and S. J. Chambers, eds., The Steampunk Bible: An Illustrated Guide to the World of Imaginary Airships, Corsets and Goggles, Mad Scientists, and Strange Literature (New York: Abrams Image, 2011), 9.
[3] Catastrophone Orchestra and Arts Collective (NYC), “What Then is Steampunk? Colonizing the Past so We Can Dream the Future,” Steampunk Magazine 1, 4.
[4] Catastrophone Orchestra and Arts Collective, “What Then is Steampunk,” 5.
Posted by Keith Green at 10:15 PM