Sometimes the stories of Terra Mysterium are not told in words. Sometimes it's a moment, an image, a feeling, or a mood. Often our art is visual and fleeting; but sometimes I'm around to capture that moment and preserve it for a little while longer.

In the spring we began a project to develop and produce a Goddess calendar, the Feminine Mysterium, featuring the women of TM embodying 12 different goddesses. As a photographer I'd experienced that transformative connection between shooter and subject before; when it works really well, there's this subtle shift away from the mundane, away from the outside world, and our focus narrows until our interaction becomes a dance between me, her, and our immediate environment. 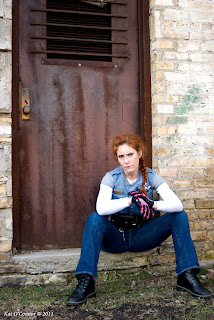 He'e'e (a Hopi kachina) was the first goddess I photographed. It began as it usually does -- we meet up, we sort out hair and clothing and makeup, we look around the location for the best places to shoot. Yet during this time we were becoming aware of each other, aware of our environment... and aware of something a little bit more. We were relaxed and open and ideas and opportunities seemed to present themselves. Amy, as He'e'e, wished to embody her as an urban warrior-protector; and so here was this rundown industrial building which brought the urban grit together with the warrior grit.

I think this is my favorite image out of the entire shoot. The distressed color and high contrast were a lucky accident, but it lends a bit of extra harshness to the dirty urban feel. Here I am looking at someone who has spent lifetimes in the fighter-protector business. She's no softie and would rather be your guardian than your friend, but she is a loyal guardian. No nonsense, alert even when relaxed, at home in her own body and in the rough neighborhoods she takes it upon herself to watch over.

In a way this communion always happens; and in that way there's always a spiritual element to my art, no matter what I'm doing. Every communion is different, every subtle dance is different, and here I felt privileged to take part in a project where a goddess accepts the invitation to step in and choreograph the dance.
Posted by Unknown at 5:12 PM